WE LIVE IN EDMONTON, THE CAPITAL OF ALBERTA, CANADA 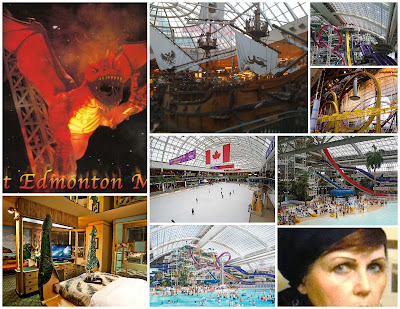 Where we live there is a great huge mall
Inside it there's a fire-breathing dragon - no, really - he doesn't work all the time but
when he does, he moves his body like a real dragon and smoke comes out his nose and everything
There's also a golf-course, they say it's a mini but it seems big to play so I don't know about that
There's a water-park with zillions of slides
And a bungee jump that's fun to watch but we all think we don't want to do that at least not right yet
There's also a seal and dolphin show and the dolphins always splash the crowd

There is a pirate ship which is actually a copy of one of Christopher Columbus's ships
which we don't really get 'cause apparently he wasn't a pirate
It doesn't matter, we went there and it's a pirate ship alright - see the picture?
That's our Grandma dressed up like a lady pirate which we just learned about - lady pirates -
so there you go

There's even a hotel at one end of the place
Where you can stay in a room from all different countries
Or even from out of this world; this one's from a place
Called Polly Sneeze Yah or something like that ...

Right in the middle of the mall - is an ice-rink ...yes, really a big size rink for hockey
and regular skating too
Can you imagine that?

It's a super place to live and that's just the mall!
There's tons more stuff but that enough for now!